So, how was the second day in Skåneland? It started out with a great breakfast with a lot of Lantmännen AXA products, which was necessary since we had an active day in front of us!  First we visited one of Lantmännen Lantbruks resellers, Hjalmar Möller. He showed us his plant and where he stores all the grain before selling it to Lantmännen Lantbruk in Helsingborg.

Then we went to Broddahill, which is the farm where I grew up. We divided us into two teams: Team Swecon (Construction Equipment) and Team Lantmännen Agriculture (Farmers) as you can see the outfit below. 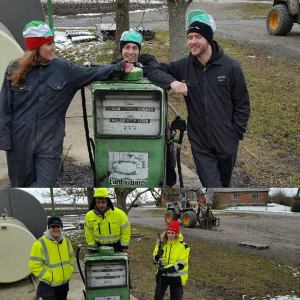 After a short tour of the farm, the big challenge began which consisted of three “farming” tasks. The first task was to transport a tire with the help of two tractors and an excavator. Sounds easy right? But there were some shaky trainees who sat behind the wheel and focused on not losing the tire. I’m surprised how good they were and in the end Team Lantmännen Agriculture won the first task! 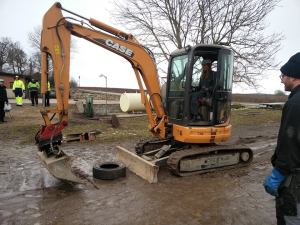 All trainees are very competitive, and losing a tractor race was something that neither Team Swecon nor Lantmännen Agriculture wanted to suffer. The second task was crucial to who would win the competition and it was to fill a tractor and trailer with gravel using a loader, drive round the track and reversing around a corner as well as to cultivate with a third tractor. First out was Pontus who drove at very high speed. Team Swecon became worried and when it was time for Aron to run, he put the pedal to the metal, and as a result, he received a proper skid with the tractor (a total weight of 14 tons) with the fully loaded trailer after him in a staggering speed! With his life at risk, and totally out of control, he drove past the finish line narrowly ahead of team Lantmännen.

As a result, the final task determined who would win the competition. The last task was a quiz on Swedish agricultural statistics(such as, Americans on average consumed about 7 centilitres of vodka per person produced by Swedish wheat in 2015, there are more horses than cows in Sweden and Lars is the most common farming name). There were not many answers that were correct but at last we appointed Team Swecon winner of the competition which we all celebrated together with a restaurant visit in Malmö later in the evening. A very enjoyable visit, even if moving a tire does not belong to the daily tasks of a farmer, I’m convinced that all trainees have become better tractor drivers and finally they can manage a joystick on an excavator 😉 /Joel